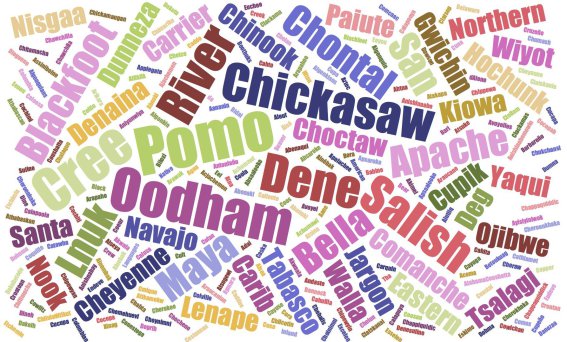 Scholars estimate that upon European contact there were 350 Indigenous languages spoken in the US, now 115 remain. Without immediate measures, it’s estimated that another 79 languages could disappear in the next two decades.

Due to the fact that The Wassamasaw Tribe is a settlement Tribe of many different Native people, we have no unified Native Language.  In an endeavor to connect with all our different native ancestors, we are learning about their languages.

As the reminants of the Etiwan tribe, we strive to become closer to our ancestors throuh language. Sadly, the original Cusabo branch language spoken by the Ashepoo, Combahee, Escamaçu, Kiawah, and Etiwan, known as the Cusaboan has become extinct. Only a few words (mostly town names) of this language was recorded in the 16th century. Most words lack translations. Approximately 100 place names and 12 personal names in Cusaboan have survived.

To learn more about the Cusaboan language you can read more in: The Smithsonian Institution’s Handbook of North American Indians, Volume 14: Southeast

Catawba is one of two Eastern Siouan languages of the eastern US. The last fluent speaker died in in 1959. The Catawba tribe is now working to revitalize and preserve the Catawba language.

To learn more about the Catawba language use the following link see post from the Catawba Language Project: https://www.facebook.com/catawbalanguage/

The Cherokee Path was where the original settlemnt that would later become the Varnertown Indian comunity was formed. As such many Cherokee Indians were the first settlers. Cherokee is an Iroquoian language, and the only Southern Iroquoian language spoken today.

To learn the Cherokee language use the following link: https://language.cherokee.org/

One of the tribe's ancestral lines include Edisto ansetory. The language spoken by the Edisto was the Natchez language. This language is still used today by those of the Edisto Natchez-Kusso tribe of South Carolina, in which we have kinship ties.