Origin of the Tribal Community

The Wassamasaw Tribe is a Native American community, which is located near present-day Carnes Crossroads between the major towns of Summerville, Moncks Corner and Goose Creek. The Wassamasaw Tribe of Varnertown Indians are descendants from the original Etiwan, Edisto, Catawba, Cherokee, and other Settlement Indians, and is located approximately 30 miles northwest of Charleston, South Carolina. 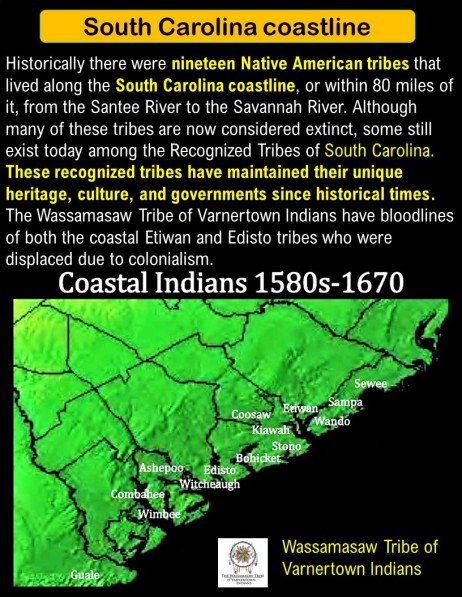 The Varnertown Indian community was formed from 2 distinct Native groups who settled together for protection and preservation.  These groups were: a settlement tribe that formed along the Cherokee trading path, consisting of Catawba, Cherokee, and Edisto Indians; and the Etiwan Tribe, who were granted land and moved into the Wassamassaw Swamp after the Yamasee War in 1724 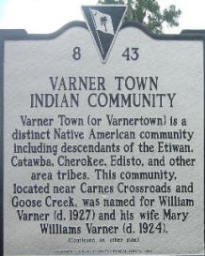 The Edisto (Edistow) Indians (members of the Cusabo) are Native to the South Carolina lowcountry and are documented in history from at least 1562 forward. The Edisto land was acquired by treaty by the Carolina colony between 1670 and 1686. After the Yamasee War of 1715 the Edisto Indians from Edisto Island gradually disappeared as a Tribe until descendants of the Edisto were documented in our settlement community off of the Cherokee Path by Carnes Crossroads.

The Etiwan (Ittiwan) Indians (also members of the Cusabo) were discovered on Ittiwan island (now Known As Daniel Island) in 1605. Later after the Yamasee War, in 1724, the Etiwan were granted land In the Wassamassaw swamp.

Because of the multitude of tribes who were involved in the war, and the large area where fighting took place, there was no definitive end to the conflict. Much of the large battles were over in the first few months. Peace treaties were established such as the Cherokee alliance of early 1716 and the various peace treaties with various Creek and other Muskogean peoples in 1717.

After the Yamasee War

After the war much of the Etiwan were scattered in small groups in St. James Goose Creek Parish and St. Johns Berkeley Parish.  In 1724 an Etiwan representative approached the Commons House of Assembly to request a single settlement area to bring the tribal members together and provide a means of support for their dwindling numbers. At the time, there were believed to be less than 200 Etiwan people. These records can still be found in The Journal of the Commons House of Assembly.

The Commons House of Assembly granted the request and issued land on the western side of Wassamassaw Swamp.

Pictured above is the Wassamassaw Swamp Historical Marker

After gaining land in the Wassamassaw Swamp, their dwindling numbers and lack of response from the South Carolina government to help defend them from other invading tribes and slave raiding parties, the few remaining Etiwan left the Swamp seeking refuge with nearby tribal communities.

This lead them to the nearby Settlement Tribe located on the Cherokee Path.

Pictured above is a map of the Historic Cherokee path.

The Cherokee path (also Keowee path) was the primary route from Charleston to Columbia connecting all of the Cherokee territories.

The path ran 130 miles (210 km) from Charlestown to the colonial settlement of Ninety Six.  It then traveled to Fort Prince George and the Cherokee village of Keowee, the principal town of the Cherokee Lower settlements (in present day Oconee, Greenville, Pickens and Anderson counties). From Keowee, the path branched out into the Unaka Mountains, usually following streams and valleys; to Clayton, Georgia;  up to Franklin and Murphy in North Carolina (the Middle settlements); and across to the Cherokee towns in Tennessee (the Overhill settlements).

These many intersecting trading paths contributed to form small settlements of Native Americans. Natives from many different tribes settled to make a small “Town” between larger settlements on the path.  One such settlement was what would later be known as the Varnertown Indian Community.  These Natives came from many different tribes including: Etiwan, Catawba, Cherokee, Edisto, Santee, and other Settlement Indians.  This community was a thriving farming community of assimilated Native Americans in St. James, Goose Creek Parish on the Cherokee path. This community was commonly referred to as Summerville Indians in the mid 1800's and eventually Varnertown Indians in the 1900's.

The name "Wassamasaw" was officially adopted by the tribe when the community formally organized as a non profit and was in the process of being recognized by the State in the early 2000's.  The name consolidated all of our native  bloodlines (Etiwan, Edisto, Catawba, Santee, and Cherokee) into one Tribal Name. The Tribe decided to call ourselves the Wassamasaw Tribe rather than Etiwan, Edisto, or Summerville Indians because our history has evolved from the blending of cultures from all of our native lines. Many of our community members today can trace themselves to ancestors of each of our bloodlines due to marriage between the separate families and kinship ties to them. Our name also recognizes the Etiwan ancestors who once resided in the Wassamassaw swamp between the 1700's and 1800. Our Etiwan ancestors moved from the "Reservation in the Wassamassaw swamp" and settled in the nearby Varnertown Settlement  community.  Now known as the Wassamasaw Tribe of Varnertown Indians, the core members of our tribe still live today,